The Baader Fluorite Flatfield Converter was designed by a top German optical designer to cover up to a 6x7 cm format at magnifications up to 8x. The 4-element fluorite design provides a diffraction-limited, apochromatic flat field over a 90 mm image circle. It produces a sharp, color-free image for any projection photography need. It can be coupled to 35 mm cameras, 6x7 cameras (adapters are available for various camera models), as well as any CCD camera using 1.25" or 2" nosepieces or threaded custom adapters. The BPFFC also can be used visually for critical high-power lunar/planetary/double star viewing.

The fluorite lenses do not add any chromatic aberrations or other optical defects to the image. The lenses are corrected from deep violet to the IR regions and present an excellent match to the new extended-wavelength CCD cameras.

The BPFFC is fully multi-coated with a hard 7-layer design, each layer exactly matched to the material index. The result is very high transmission while suppressing stray light. Looking into the front of the lenses shows a black tube with the elements barely visible as shown in the photo. All optical surfaces are polished to the highest optical standards of 1/10 wave accuracy, in order not to disturb the incoming wavefront from your telescope's optics.

For projection photography, the BPFFC is unmatched for image fidelity. Unlike eyepiece projection systems, the BPFFC is free of the common defects such as chromatic aberration, pincushion/barrel distortion, astigmatism, coma, and vignetting of the light cone. This design works equally well on all optical systems - be it Newtonians, apochromatic refractors, Schmidt-Cassegrains, Ritchey-Chretiens, etc.

The FFC System (also known as the Astro T-2 System) offers a wide array of adapters to suit a variety of needs. Also refer to Standard FFC Combinations. We have also manufactured a 2"/T-2 Adapter with brass locking ring (ADAT2) to simplify the system (it takes the place of several components). The Basic Set couples the 2"/T-2 Secure-Grip Nosepiece (AP16T) to the front of the BPFFC optic and the 2"/T-2 Adapter with brass locking ring (ADAT2) to the back, allowing a simple method for using visual and photographic accessories.

Shown from left to right:
AP16T - 2"/T-2 Secure-Grip Nosepiece (fits into 2" openings). This item helps you to come to focus when the FFC is inserted directly into your refractor or SCT (not used for Newtonians).
BPFFC - Fluorite Flatfield Converter Barlow
ADAT2 - 2"/T-2 Adapter with brass locking ring (manufactured by Astro-Physics, not shown on FFC System diagrams) 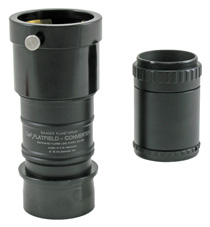 Realize the full potential of the Baader FFC (or Astro-Physics 2" Convertible Barlow, part # BARCON) when imaging as shown on the Barlow Holder System Chart  . The internal T-thread of the BH27-INT42 on this extension allows you to attach your BPFFC, BARADV or other accessory with male T-threads INSIDE the 2.7" extension tube. In this way, the camera, filter wheel, off-axis guider, and/or other accessories are all supported by the much more robust and rigid 2.7" tube system, and the Barlow only needs to support its own weight inside the extension tube.

This is particularly important when imaging at some of the higher magnifications achievable with the BPFFC where over a foot of extension may be used between the Barlow optic and the focal plane. The maximum OD of the T-thread accessory is 2.5". Please see the Barlow Holder System Chart for component options.

Achieving Various Magnifications with the BPFFC

Visual
When using the Astro-Physics Maxbright Diagonal, we suggest one of the following configurations:

Magnifications as low as 2x can be achieved by placing either the “Basic Set" or the “FFC System Components" into the AP Maxbright Diagonal (PMDMAX) and then adding the eyepiece. The magnification will vary somewhat with eyepiece design.

Using either the "Basic Set" or the "FFC System Components" in front of the AP Maxbright Diagonal will yield approximately 4x magnification. Various extension tubes can be added to increase the magnification to 8x, assuming that your telescope focuser has sufficient in-travel to allow this configuration to achieve focus.

Photographic
DSLR/SLR cameras have a 55 mm spacing distance to the film/sensor plane when using a T-ring system. The lowest magnification of approximately 2x is achieved by threading a standard T-ring directly to the back of the BPFFC body (without a 2" adapter).

3x to 8x magnifications are achieved by adding 50 mm to 320 mm. It is recommended to use the A3511 and 2.7" extension tubes to achieve these lengths. As above, this assumes that your telescope focuser has sufficient in-travel to allow this configuration to achieve focus.

CCD Camera
The FFC system allows you to achieve various magnifications with your CCD Camera. If you thread the BPFFC directly into your camera (without the 2" nosepiece or with a custom low profile adapter) the lowest possible magnification will be approximately 2x.

Similarly, 3x to 8x magnifications are achieved by adding 50 mm to 320 mm. It is recommended to use the A3511 and 2.7" extension tubes to achieve these lengths. Again, it is assumed that your telescope focuser has sufficient in-travel to allow this configuration to achieve focus.

Tips for Using the FFC System with Various Telescopes

Schmidt-Cassegrains
There are several options for attaching the BPFFC to your telescope.

Newtonians
When inserted into a 2" focuser on a Newtonian telescope, the Baader FFC Barlow will require an additional 1 inch of in-travel to allow focus at 2x magnification. More travel is required for higher powers. To use, slip the FFC directly into your focuser. Tighten the focuser screw on the smooth surface of the FFC between the ridges. You will also need our ADAT2 (and possibly a 1.25" adapter) for your eyepiece.

Use thes BPFFC with other components of the T-2 system for versatility.
Baader T-2 System Chart
Baader T-2 System Parts list. Astro-Physics carries some of these components designated by our part number that begins with BP and includes the reference number on the chart. We can special order any others that would like to have.

Fluorite Flatfield Converter warning note -possible void of warranty-Handling of CaF2 optical systems Policy per Baader Planetarium The optical system of the Baader FFC comprises genuine Calcium-fluorite lenses. The extreme refraction characteristics of CaF2 enable the design of optical systems delivering very high definition across an extremely broad spectral range. No other Barlow system can yield comparably sharp images across a similar sized field. The disadvantage of such elaborate optics, however, is its sensitivity regarding thermal tension and stress. CaF2 must not be exposed to sudden and/or high temperature changes. As a result, the FFC must not be used for solar projection photography without adequate heat protection filter, because the sudden and extreme changes in temperature may cause the fluorite lenses to crack. Damage caused by thermal stress can be identified with our inspection methods – in which case the warranty will be void. Similarly, the FFC must not be subjected to sudden temperature changes. No optical system comprising fluorite lenses (especially no telescope objectives!) must be used at 20° C below zero and then brought into (for instance) a heated living room. Again – the damage resulting from thermal stress can be seen when analyzing the stress pattern in the CaF2. Each and every CaF2 optical system needs time to adapt to temperature. For this purpose the optics need to be placed outside, or alternatively, in the unheated luggage compartment of a car during the day to allow it to cool down slowly. The same applies to warming it slowly after observation. Please do not use this optical system if you are not willing to treat it with the extra care necessary for such extremely high class and delicate optics.
×

Threaded 2.7" Extension with Internal T-thread. For use with BPFFC, BARCON and other accessories with male T-threads. The maximum OD of the T-thread accessory is 2.5". (A3511)

The Mark V Binocular Viewer is the culmination of years of research and development, originally by C

Our new 254 mm f/14.5 Maksutov-Cassegrain generated a lot of excitement when we introduced the proto

December 18, 2022. This version of the 13035FF has been replaced by the newer versions that were des

Threaded 2.7" Extension with Internal T-thread. For use with BPFFC, BARCON and other accessories with male T-threads. The maximum OD of the T-thread accessory is 2.5". (A3511)